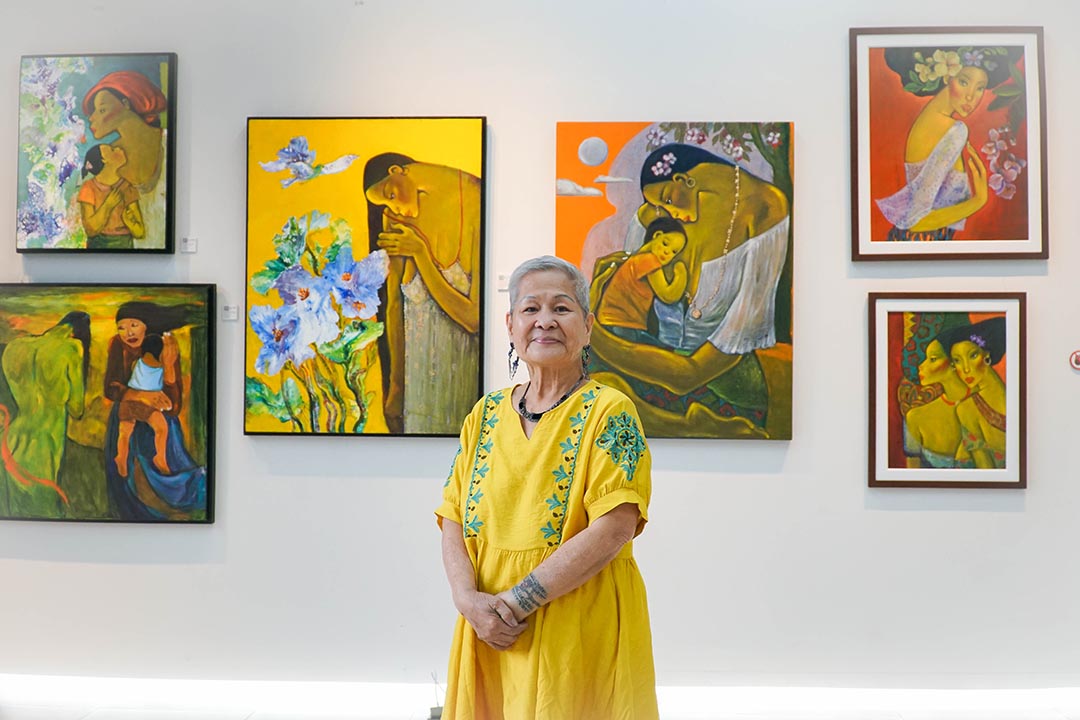 Modern contemporary artist Lydia Velasco and her family will showcase their works in a visual art exhibit called “Salinlahi IV” until November 11 at DryBrush Gallery on the 2nd floor of SM MOA Square at the Mall of Asia Complex in Pasay City.

The Velasco sisters—Lydia, Tessie Pecaña, Felicidad “Fely” Reyes, Daisy Velasco Carlos, and Sarah Velasco Doringo—share a fascination for flowers and love, which are often the subject of their artworks.

As an artist, Lydia Velasco was influenced and encouraged by her parents. Her father was a set designer for a movie studio while her mother was a homemaker who liked painting still works. In college, Velasco studied Fine Arts Major in Advertising and worked in various advertising agencies before founding her own company called Lightmoves Photo/Design, Inc.

She returned to painting when the company was stable and her paintings focused on women, celebrating their identity and freedom through her artworks. Art collectors in Japan, Singapore, Hong Kong, Germany, the United States, and the United Kingdom purchase and collect her artworks. Her works have also been auctioned by auction houses such as Sotheby’s, Borobudur, Larasati, and Masterpiece.

Daisy Carlos’ love for fairytales and nature is evident in her works as they often feature images of women surrounded by birds, animals, and flowers or being in a fantasy world.

Tessie Pecaña’s works are straightforward and her overall style leans toward classical realism, as she uses bold strokes, brilliant colors, and hazy and gentle edging that give her paintings an Impressionist touch.

Fely Reyes is a late bloomer when it comes to painting. She describes herself as a romantic who loves to paint flowers because of the love they signify.

Sarah Doringo is into acrylic pouring and applies different techniques to it such as combining colors, brush strokes, air blowing, swiping, and balloon marking.

DryBrush Gallery is honored to showcase the works of the Velasco clan because each artist has a distinct style but somehow, everything comes together perfectly in the exhibit. DryBrush Gallery started as an online gallery during the pandemic as a response to artists seeking support in selling their artworks during difficult times.

This passion project is still online but there are now two physical galleries—one in MOA Square and the other in SM City North Edsa—as DryBrush Gallery continues to support artists by providing a venue for them to show their works to the public.

You can view and purchase more than 1,500 artworks from more than 250 local artists at drybrush.com and also visit the two physical locations of the DryBrush Gallery; one in SM Mall of Asia and one in SM North Edsa.

For viewing, payment, and other inquiries, you may contact DryBrush via email at [email protected] or call 09175652917.