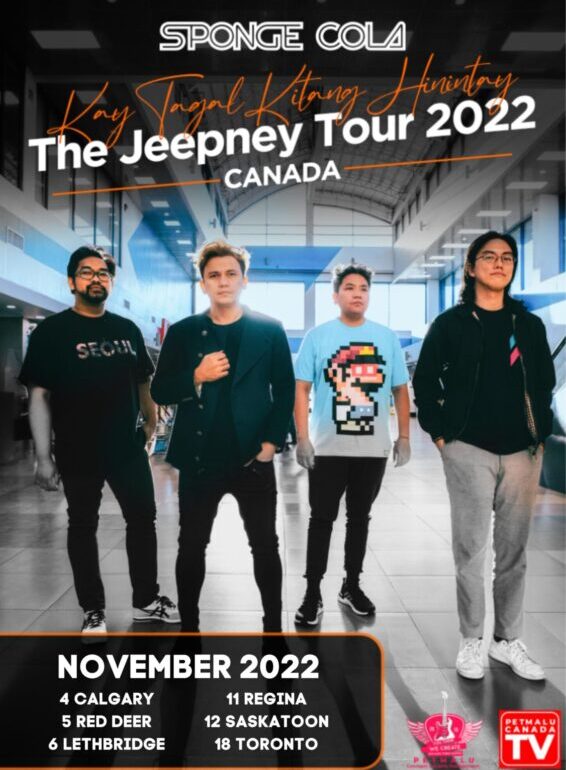 Celebrating their 20th year in the music industry, Sponge Cola is set to return to Canada where they have been performing sold-out shows since 2016. The band will once again treat their audience with some of their biggest hits, from newer songs such as “Kung Ako Ang Pumiling Tapusin Ito” and “Alamat,” to classics such as “Bitiw” and, of course, “Jeepney.”

“Canada has always been one of our favorite places to perform at, eat great food and see our friends abroad,” said Sponge Cola frontman Yael Yuzon, who is set to delight the audience with bassist Gosh Dilay, guitarist Armo Armovit, and drummer Tedmark Cruz. “We are very excited to return and reunite with our kababayans again.” .”

Kicking off “Sponge ColaThe Jeepney Tour 2022: Canada” are  back-to-back-to-back shows in Calgary on November 4, Red Deer on November 5, and Lethbridge on November 6. Confirmed dates also include November 11 in Regina and November 12 in Saskatoon.

Meanwhile, Sponge Cola will head to Toronto on November 18 in a show featuring special guests Gloc-9 and Shanti Dope.

More stops for “The Jeepney Tour 2022: Canada” will be announced soon. Aside from the series of shows in Canada, the band  will also be having a tour in the United States early next year.

Formed in 2002, the band will be celebrating 20 years in the music industry with a special anniversary showcase on December 14 at the PETA Theater.

The show, titled “Bottoms Up!,” will be unlike any other concert. Regular Sponge Cola concert director Pao Valenciano promises an exciting performance that will be tapping the band’s individual theater backgrounds.

There are only limited seats available for “Bottoms Up!” Tickets are exclusively available at SM Tickets. Early bird rates apply until the end of October.

Aside from the tour and anniversary concert, Sponge Cola fans have more reasons to celebrate as the band is set to launch a new album before the year ends.