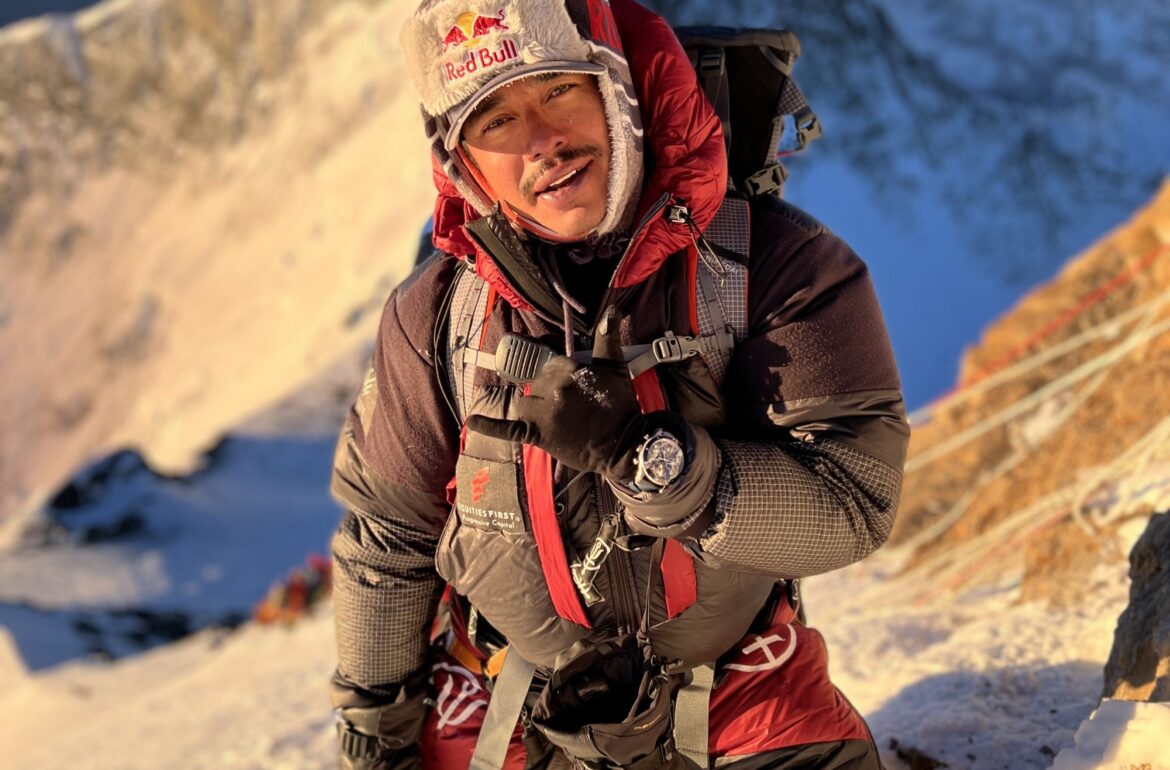 On May 16th 2022, Nimsdai Purja achieved the extraordinary feat of beingthefirst
mountaineer to ascend the summits of Everest, Lhotse and Kanchenjunga without
supplemental oxygen in the record-breaking timeframe of just 8 days, 23 hoursand10minutes andasecondrecordofdoingthe Everest to Lhotse traverse without oxygenin26hours. He undertook this challenge wearing the Montblanc 1858 GeosphereChronograph “0 Oxygen” LE290 onhiswrist,atimepiecedevoidofall oxygen, puttingthetimepiece through the ultimate test.

From May 7th to May 16th 2022, Nepal-born British mountaineer Nimsdai Purjapushedthe boundaries of what is possible by first climbing Kanchenjunga, followed by Everest andfinallyLhotse,allwithout any oxygen to assist him.

“I am thrilled to have completed the challenge I set myself, and in doing so, continuetoprove what humankind can do with the right preparation and focus. I amvery thankful forMontblanc’s support, not just providing me with this innovative watch built for extremeconditions, but also participating in our collective efforts to tackle the issueof theaccumulation of expedition waste that is polluting the environment of the Himalayas,” saysNimsdai Purja.

The Montblanc 1858 Geosphere Chronograph “0 Oxygen” timepiece, limited to 290 pieces, has several benefits for explorers who need their equipment to work in some of the harshest environments. Zero oxygen inside the movement not only eliminates fogging, which can occur with drastic temperature changes at altitude, but also prevents oxidization. Without oxygen, all the components last far longer and will providegreaterprecision over time.

Each timepiece comes with a zero-oxygen certificate that attests to the fact that the watch has been successfully encased without oxygen. In addition to the certificate, eachtimepieceundergoes the Maison’s unforgiving 500-hour test. But Montblanc wanted to takethingsone step further by taking the new 1858 Geosphere Chronograph 0 Oxygen LE290onareal mountaineering expedition to the world’s highest mountain above sea level –Mount
Everest.

In addition, Montblanc is proud to support the Nimsdai Foundation’s Big MountainCleanupinitiative to keep these magnificent mountains clean for future generations. Theinitiativeis aimed at addressing the waste generated by the increasingly popular mountainexpedition culture by providing full time, seasonal clean up teams on all widely climbedmountains around the globe paired with associated regional recycling and educational
initiatives.