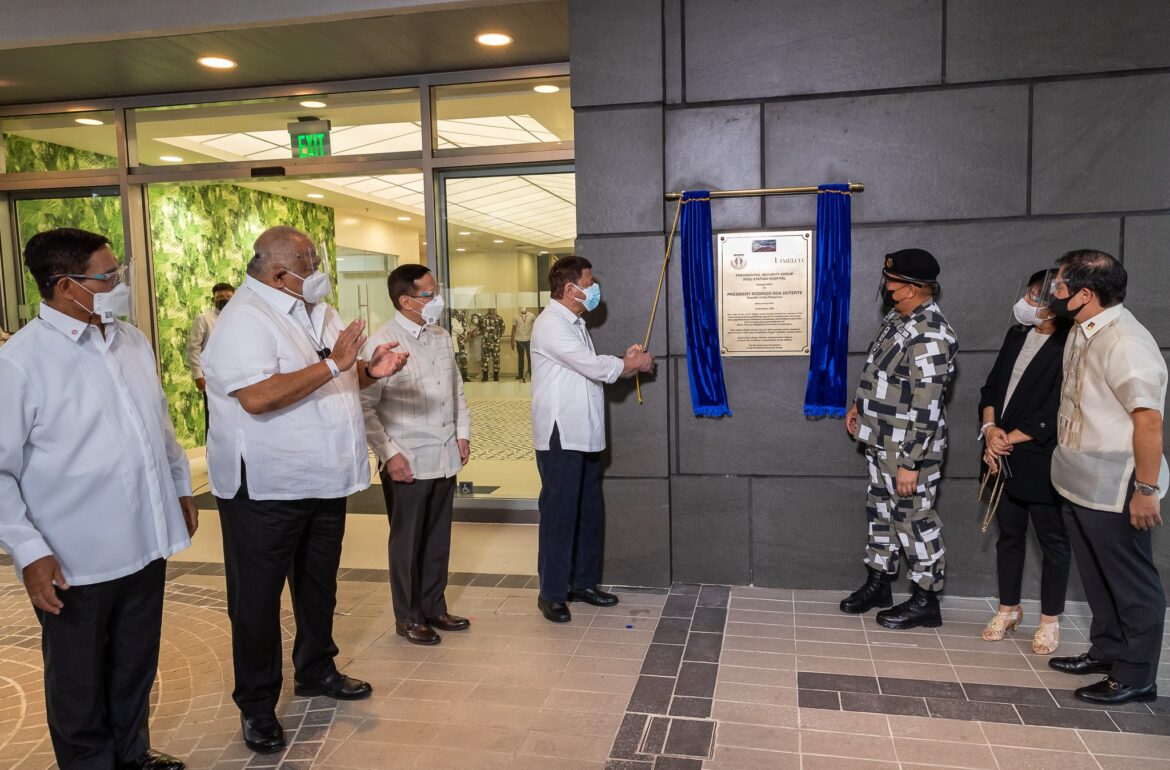 MRP Foundation, the charitable arm of the luxury integrated resort City of Dreams Manila, conceptualized and fully funded the construction of the two-story 51-bed hospital, and the procurement of the most advanced medical equipment. A project of the Department of National Defense and PSG, it was undertaken with the support of gaming regulator Philippine Gaming Corporation (PAGCOR), under which City of Dreams Manila is a casino licensee.

“The PSG Station Hospital is an affirmation of our commitment towards nation-building by supporting PAGCOR’s various undertakings towards preserving the environment, education, culture, and advancing healthcare programs. We are thankful for the opportunity to contribute in particular to the national government’s efforts in securing a resilient health system,” Clarence Chung, Chairman and President of MRP Foundation said, by way of providing the optimum health care for the men and women of  the government protection agency tasked to protect the President, Vice President, their immediate families and former Presidents and Vice Presidents of the Philippines.

The President thanked the Foundation and PAGCOR for “the most beautiful” facility, and said in a speech, “The construction of this medical facility is an admirable feat, especially amidst the challenges of the COVID-19 pandemic. This will greatly benefit PSG personnel, their dependents and other primary stakeholders.”

The 9,000-square meter PSG Station Hospital is one of the few health facilities in the country that boasts of the latest Multi-place Hyperbaric Oxygen Chamber. The HBOT treats multiple patients at the same time, to  help boost the body’s natural healing processes, and in the speedy treatment of various medical indications and health issues such as decompression sickness, arterial gas embolism, burns, gunshot wounds, strokes, and post-traumatic stress disorder, among others.

Built from the ground, MRP Foundation undertook the PSG Station Hospital project, which began with signing of the Memorandum of Agreement with the Department of National Defense in May of 2018 and was completed in October 2021. The PSG Station Hospital was built to the most exacting standards by the country’s top architects, engineers, and project managers: D.M. Consunji, Inc., D.A. Abcede and Associates, Archion Architects, Sy2 and Associates, Inc., R.J. Calpo and Partners, and N.G. Yumol and Associates.

City of Dreams Manila’s charitable arm, MRP Foundation was incorporated and registered with the Securities and Exchange Commission as a compliance requirement of Melco Resorts Leisure (PHP) Corporation under the terms of its gaming license with PAGCOR. In compliance with PAGCOR’s Implementing Rules and Regulations for Foundations, MRP Foundation implements long-term and sustainable corporate social responsibility (CSR) undertakings and PAGCOR-approved projects in support and furtherance of programs and projects under these three categories: Cultural Heritage, Education, and Environment and Health Programs.

The PSG Station Hospital is the latest undertaking of MRP Foundation in contributing to the country’s health and environmental programs. Previous notable projects include: a P20M donation for the heath needs and services of evacuees of the Taal Volcano eruption in 2020; P150M worth of relief goods donated through the Office of the President in 2020 for those most vulnerable amid the Covid-19 pandemic; P150M donation to the local government of Paranaque for the purchase of Covid-19 vaccines, RT-PCR testing services and other supplies; P12M donation in aid of Paranaque City’s health program consisting of the procurement of medicines, medical supplies and equipment for government-maintained hospitals; and a cumulative of about P33M to support President Duterte’s various initiatives for the welfare of the AFP and PNP members. It also continues to support Operation Smile’s community assistance projects, among other private charities.