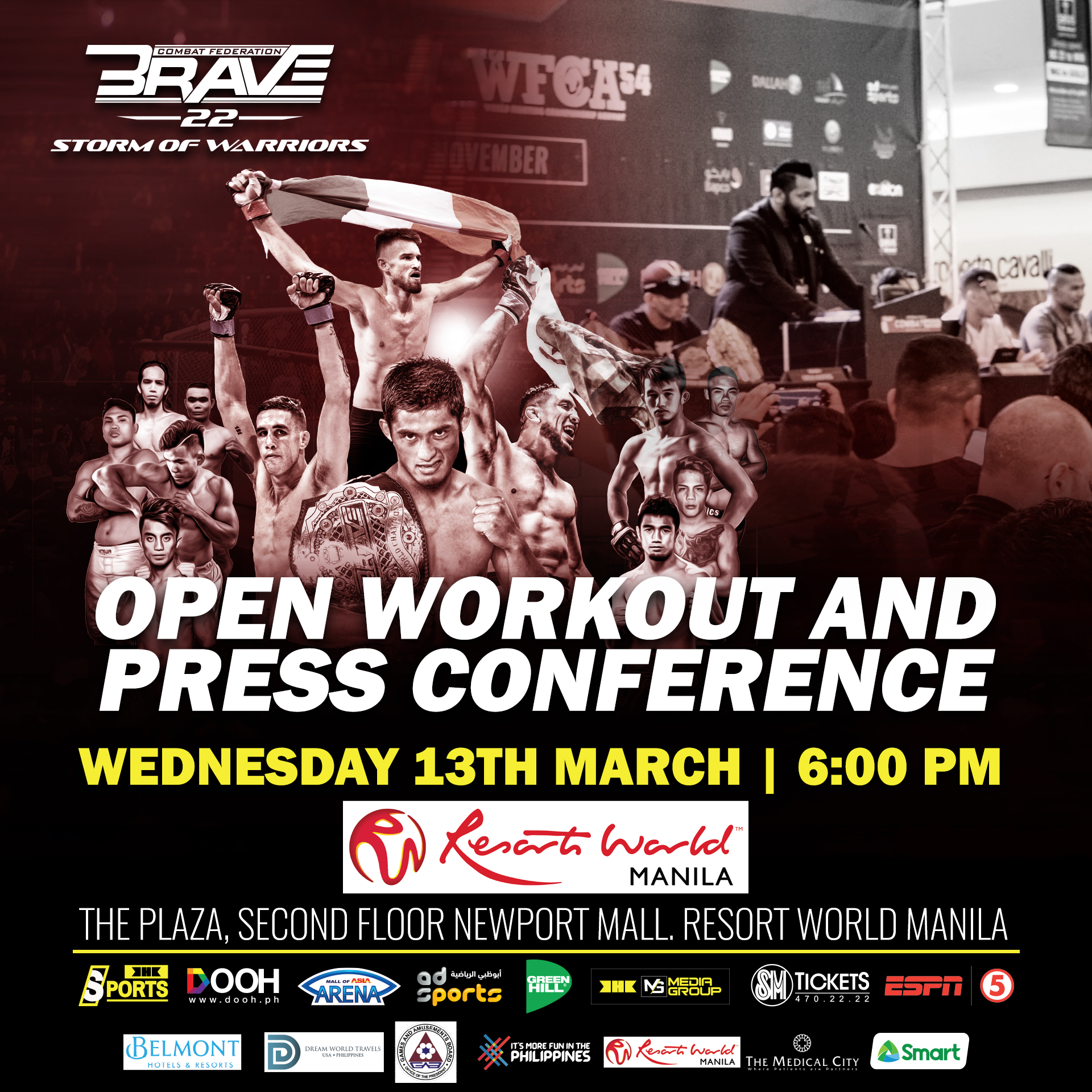 Brave Combat Federation’s first fight week of 2019 is underway as fighters from all over the world have touched down in Manila, Philippines, to take part in the groundbreaking Brave 22: Storm of Warriors, set for the Mall of Asia Arena, on March 15th. Before that, however, some of the brightest stars in the fight card will lighten up the Resort World Manila for the open workouts, which will be followed by a special press conference, this Wednesday (13).

Expected for the event are the headliners, Brave Bantamweight champion Stephen Loman, and challenger Elias Boudegzdame, as well as Cian Cowley (Ireland) and John Brewin (New Zealand), who face each other in the co-main event of the evening.

Other Filipino stars such as Jeremy Pacatiw, Marc Alcoba, Rolando Dy will also be in attendance as they get ready for their homecoming inside the Brave cage. Pakistan’s Mehmosh Raza will also be in the stage at the Resort World Manila.

The event will take place at the second floor of the Newport Mall, inside the Resort, on 6 pm (local time) and will feature a presentation from the fighters, who will do a quick training session for the fans, as well as answering questions from the media.

Brave 22: Storm of Warriors marks the first time the biggest MMA promotion in the Middle East lands in the Philippines. Ten local warriors will take on the world’s best in a fight card full of excitement and entertainment.

Brave Combat Federation (Brave CF) is a Mixed Martial Arts promotion under KHK MMA Bahrain through the vision of His Highness Shaikh Khalid bin Hamad Al Khalifa, the prince of Bahrain. His vision is to create a global sports media property which would unite nations through sports and turn athletes into champions.

Brave 22: Storm of Warriors is Brave CF’s 22nd MMA event and its first event in the Philippines. The main card will feature Filipino fighter Stephen Loman, who will defend his bantamweight belt for the third time and for the first time on home soil against Elias Boudegzdame of France. The event will be held on March 15, 2019 at the Mall of Asia Arena, Pasay City, Philippines.

For more information about Brave and this event, please visit www.bravefights.com/brave-22.