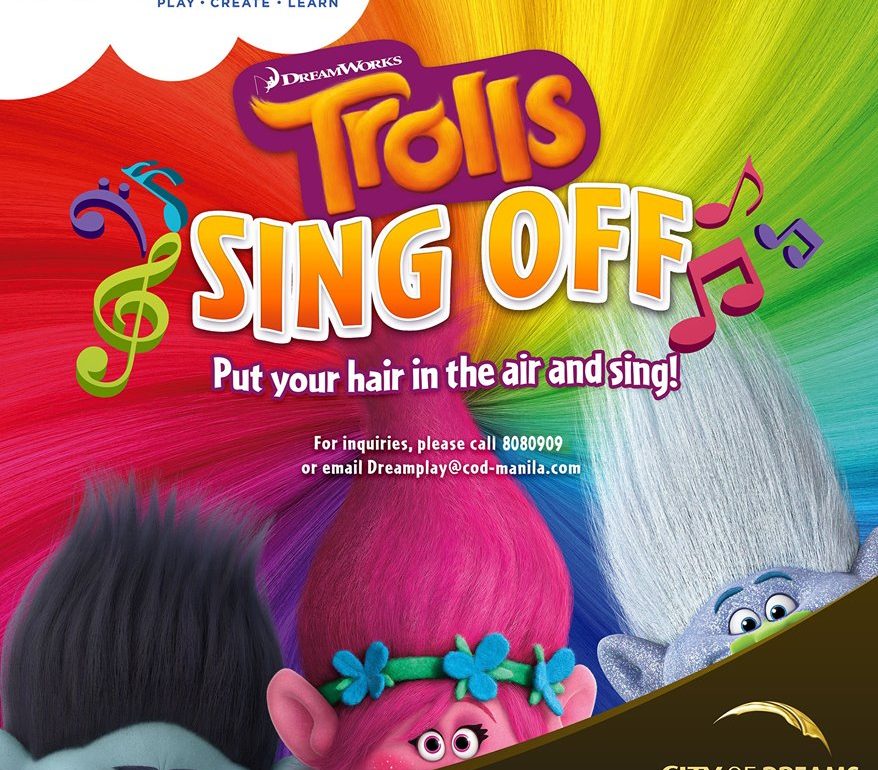 DREAMPLAY HOLDS THE FIRST “TROLLS SING OFF” FOR CHILDREN 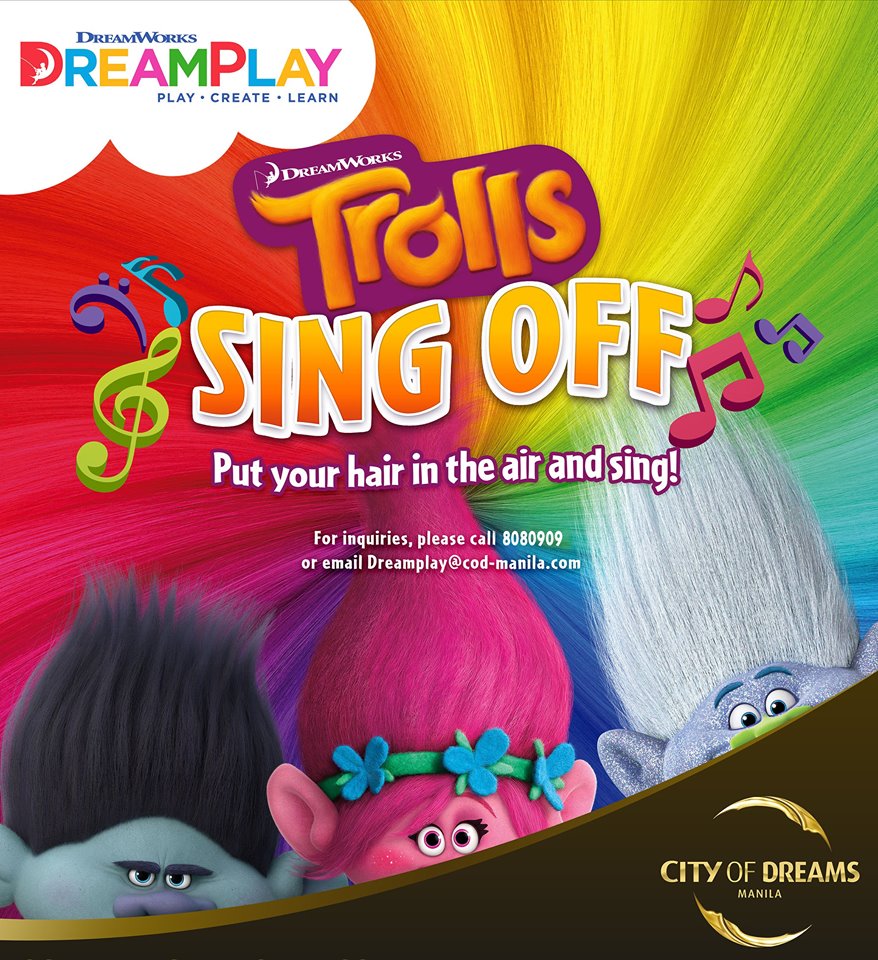 DreamPlay, City of Dreams Manila’s DreamWorks-inspired interactive play space, is searching for talented children ages 6 to 12 years old to join and sing their favorite Trolls movie soundtrack in the first “Trolls Sing Off” and vie for the grand prize of: P20,000, DreamPlay annual pass and plaque, P3,000 gift vouchers at DreamShop and Chez Gingy, an overnight stay at Nobu Hotel Manila and other exciting prizes.

Weekly elimination rounds will be held on April 23 & 30, and May 13 & 21 at 2pm. Qualifiers will compete in the semifinals on May 7 & 28, 2pm where six finalists will be chosen to compete in the grand finals on June 12, 2pm. Finalists will also bring home four complimentary DreamPlay passes, P1,000 DreamShop voucher and a souvenir photo with Dreamworks characters.

DreamPlay is now accepting signed entry forms including parent’s consent together with a copy of the contestant’s birth certificate and his parent’s identification card until May 7. Interested parties may fill out the entry form at DreamPlay or send an email to d[email protected] to get the form.

Terms and conditions apply, per DTI-FTEB Permit No. 4112 series of 2017. For further inquiries and information, interested parties can call 800 8080 or e-mail [email protected] or visit cityofdreamsmanila.com.

DreamPlay by DreamWorks at City of Dreams Manila is a first-of-its-kind indoor, interactive play and creativity center. Built upon the incredible stories of DreamWorks and brought to life through the latest digital technologies, DreamPlay allows kids to experience their wildest dreams. Whether becoming a kung fu master with Po or soaring through the skies with dragons, DreamPlay is a true breakthrough in family entertainment. The 5,000 square meter space features more than 12 attractions inspired by DreamWorks’ beloved movie franchises Shrek, Kung Fu Panda, Madagascar and How to Train Your Dragon, a restaurant and three themed party rooms with a total capacity of 120 seats.

DreamWorks Animation (Nasdaq: DWA) is a global family entertainment company with business interests that span feature film and television production; licensing and consumer products; location-based entertainment; and new media properties, including the Company’s controlling interest in AwesomenessTV.   The Company’s feature film heritage includes many of the world’s most-beloved characters and franchises, including Shrek, Madagascar, Kung Fu Panda and How to Train Your Dragon, while its 32 feature film releases have amassed more than $13 billion in global box office receipts.  DWA’s television business has quickly become one of the world’s leading suppliers of high-quality family programming, reaching consumers on linear and on-demand platforms in more than 130 countries and winning a total of 30 Emmy™ Awards to date.  The Company’s deep portfolio of intellectual property is supported by a robust, worldwide consumer products practice, which includes licensing, and location-based entertainment venues around the world.  The Company is also the majority owner of AwesomenessTV, a leading video destination for Generation Z and Millennial audiences,  and also owns 45% of Oriental DreamWorks, a world-class animation studio in China that produces family entertainment for both Chinese and global audiences.

City of Dreams Manila marks the formal entry of Melco Resorts & Entertainment Limited into the fast-growing and dynamic tourism industry in the Philippines. The integrated casino resort at Entertainment City, Manila Bay, Manila, officially opened its doors to the public in February 2015 and is operated by Melco Crown Philippines.

The dynamic and innovative resort complex, located on an approximately 6.2-hectare site at the gateway to Entertainment City, includes the ultimate in entertainment, hotel, retail and dining and lifestyle experiences with aggregated gaming space, including VIP and mass-market gaming facilities with approximately 253 gaming tables, 1,530 slot machines and 126 electronic table games.

City of Dreams Manila delivers an unparalleled entertainment and hospitality experience to the Philippines and is playing a key role in strengthening the depth and diversity of Manila’s leisure, business and tourism offering, enhancing its growing position as one of Asia’s premier leisure destinations. It has been developed to specifically meet the needs of the large, rapidly growing and increasingly diverse audience of leisure and entertainment seekers both in the Philippines and those visiting Manila from across the Asia region and around the world. For additional information, please visit www.cityofdreamsmanila.com.

Melco Crown (Philippines) Resorts Corporation, with its shares listed on the Philippine Stock Exchange (PSE: MCP), is a subsidiary of Melco Resorts & Entertainment Limited (NASDAQ: MPEL – to be changed to MLCO). It has developed City of Dreams Manila, a casino, hotel, retail and entertainment integrated resort, which has three luxury hotels each with two towers, numerous specialty restaurants and bars, gaming and retail facilities, exciting entertainment venues including a family entertainment center, and a multi-level car park. For more information about Melco Resorts & Entertainment Limited, visit www.melco-resort.com.