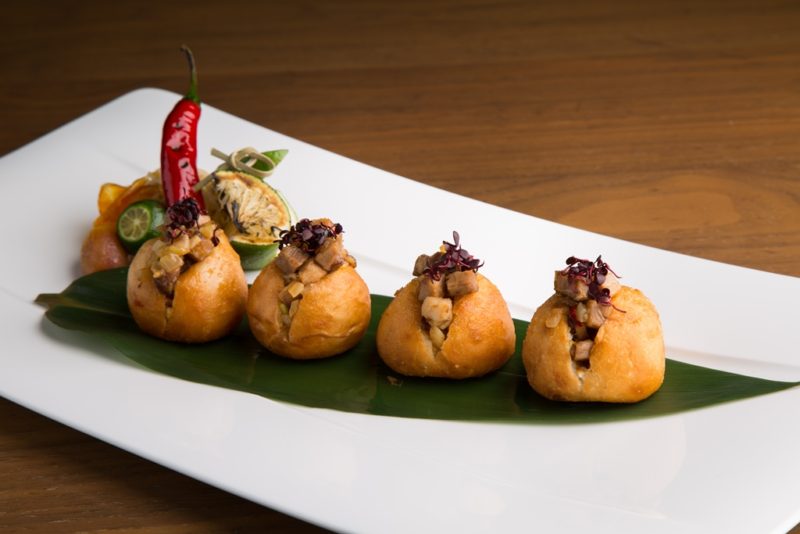 Filipino-inspired specials take center stage at Nobu Manila restaurant during dinner from April 1 to June 30 to titillate the palate of diners who have been enthralled by the celebrated Nobu new-style cuisine.

For this gastronomic experience, Nobu Manila’s Chef Michael infuses into each of the Nobu specials distinct Filipino flavors and ingredients that complement the basic tastes of Nobu cuisine that is popularized by celebrity chef Nobu Matsuhisa.

The novel undertaking to present a fusion of Filipino classic and Nobu cuisines at affordable prices in an a la carte is held timely with the Flavors of the Philippines, the annual gastronomy festival by the Department of Tourism and the Tourism Promotions Board.

For inquiries and reservations, guests can call 8008080 or 6912882 or email [email protected] or visit cityofdreams.com.

Michael, a Fil-Am, helms Nobu Manila’s kitchen as the Head Chef, bringing with him a wealth of nine years’ experience in Nobu restaurants, where he worked himself up to becoming Sous Chef of Nobu Los Angeles and Chef de Cuisine in Nobu Las Vegas. He has been passionately creating delightful dining experiences for over 20 years. His current position at Nobu Manila allows him to infuse Filipino ingredients and methods into Nobu-style dishes, creating exceptional and unique dishes for both the foreign and Filipino palates.

Nobu restaurants, simultaneously a visual and culinary delight, continue to receive unprecedented praise and rave reviews from publications such as the New York Times, the Zagat Surveys, and the Michelin Guides. The restaurants’ popularity and devoted following are a tribute to Chef Nobu Matsuhisa’s innovation in traditional Japanese cooking. For additional information, please visit www.noburestaurants.com.

Named one of luxury’s 25 Most Innovative Brands by Robb Report, Nobu Hospitality is ranked among an elite selection of global luxury brands.  The natural growth of Nobu hospitality built on service, image, and reputation, offers the complete spectrum of hotel and restaurant management for unique projects around the world.  Founded by Nobu Matsuhisa, Robert De Niro and Meir Teper, with operations spanning five continents, the Nobu brand thrives in the world’s capitals as the ultimate destination lifestyle experience.  The first Nobu Hotel opened in 2013 as a boutique hotel within Caesars Palace Las Vegas and was subsequently named one of the Hottest New Hotels by CNN Travel, Top North America Hotel Opening by Luxury Travel Advisor and subsequently Luxury Travel Advisor’s Award of Excellence.  The Nobu Hotel City of Dreams Manila opened in 2014 and Nobu Hotel Miami Beach in 2016 and will be followed by Nobu Hotels in London, Malibu, Riyadh, Los Cabos, Chicago, Bahrain and Toronto.  Nobu is strategically focused on further expanding its global portfolio of hotels through a solid development pipeline. For more information, please visit www.nobuhospitality.com.

City of Dreams Manila marks the formal entry of Melco Crown Entertainment into the fast-growing and dynamic tourism industry in the Philippines. The integrated casino resort at Entertainment City, Manila Bay, Manila, officially opened its doors to the public in February 2015 and is operated by Melco Crown Philippines.

The dynamic and innovative resort complex, located on an approximately 6.2-hectare site at the gateway to Entertainment City, includes the ultimate in entertainment, hotel, retail and dining and lifestyle experiences with aggregated gaming space, including VIP and mass-market gaming facilities with approximately 253 gaming tables, 1,530 slot machines and 126 electronic table games.

City of Dreams Manila delivers an unparalleled entertainment and hospitality experience to the Philippines and is playing a key role in strengthening the depth and diversity of Manila’s leisure, business and tourism offering, enhancing its growing position as one of Asia’s premier leisure destinations. It has been developed to specifically meet the needs of the large, rapidly growing and increasingly diverse audience of leisure and entertainment seekers both in the Philippines and those visiting Manila from across the Asia region and around the world. For additional information, please visit www.cityofdreams.com.ph.

Melco Crown (Philippines) Resorts Corporation, with its shares listed on the Philippine Stock Exchange (PSE: MCP), is a subsidiary of Melco Crown Entertainment (SEHK: 6883; NASDAQ: MPEL). It has developed City of Dreams Manila, a casino, hotel, retail and entertainment integrated resort, which has three luxury hotels each with two towers, numerous specialty restaurants and bars, gaming and retail facilities, exciting entertainment venues including a family entertainment center, and a multi-level car park. For more information about Melco Crown, visit www.melco-crown.com.