Employee engagement and involvement in the company’s corporate social responsibility (CSR) efforts are among the key drivers that foster employee satisfaction and well-being in City of Dreams Manila. Inspiring action, recognizing and expressing belief in the potential of its employees, the luxury integrated resort’s motivational and fun undertakings recognize outstanding performance, showcase diverse talents and promote sociability, alongside employee volunteerism that boosts morale.

“As City of Dreams Manila celebrates its second year anniversary, we recognize that human resources are one of our most invaluable assets and we are committed to deliver delightful and engaging experiences for our employees through our various activities. We endeavor to inspire them to take pride in their profession and have a sense of belongingness. As we stress the importance of observing work and life balance and being more productive and creative in their respective jobs, we motivate them to be actively involved in community outreach programs,” Property President Geoff Andres states.

To recognize outstanding performance, the luxury resort presents “President’s Award,” a prestigious annual recognition given by the Property President for six outstanding employees from the ranks of associate to managerial level and front-of-the-house and heart-of-the-house categories. Selecting the best from some 5,000 employees, a stringent nomination process draws out the most outstanding performers. The awardees receive a trophy and pin, cash prize and gift vouchers, and a special dinner with the Property President. Two of the awardees last year also represented City of Dreams Manila in the regional BMW Hotelier Awards 2016 held in Macau.

Fun and engaging employee activities include a monthly “Pasikatan” talent competition from which the year’s grand prize winners are awarded a cash prize of P8,888, an overnight accommodation at Nobu Hotel for two persons and gift vouchers for the complex’s various facilities. Other competitions held last year were holiday décor-making among the various departments, which awarded P15,000 to the grand prize winner; a poster-making contest that revealed latent artistic talents vying for the plum prize of P10,000; and the spectacular annual employees Christmas party. 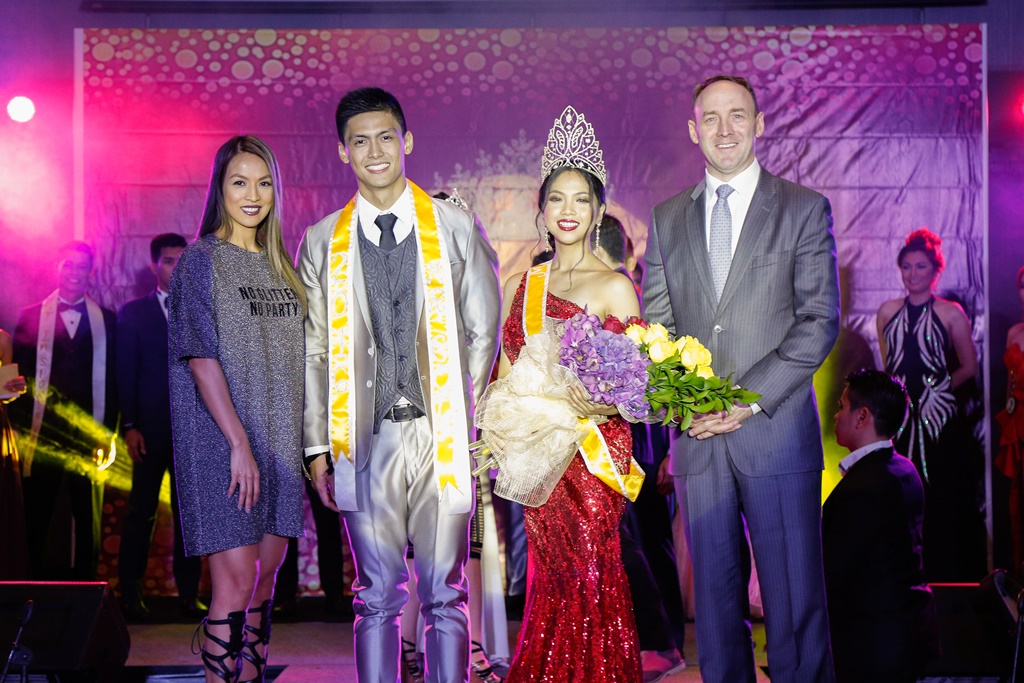 The first Mr. and Ms. City of Dreams Manila pageant was launched late last year, where a series of preliminary rounds screened over 38 contestants vying for the title, as 16 finalists composed of eight men and eight women competed in their sportswear, cocktail and evening long gown. Iriz Bjergh Rodrin, Bell Captain, at Nobu Hotel and Elena Faith Cariño, Human Resources Training and Development Assistant were announced as Mr. & Ms. City of Dreams Manila 2016 respectively. Aside from a cash prize of P20,000 each and other attractive prizes, they were given the opportunity to attend the Miss Universe 2016 Governor’s Ball.

City of Dreams Manila also recognizes the importance of work and life balance for its employees, encouraging them to take scheduled vacations for rest and recreation – for which “Picture Perfect”, an enjoyable activity wherein employees submit their most interesting holiday travel photos. Zumba Nights, and “Palarong Pinoy” mini-olympics fostering team camaraderie and local culture are held for fun and fitness, while livelihood workshops and seminars are also offered for employees and family members.

“These undertakings advocate the well-being and productivity of our employees and develop their multi-faceted talents as they stand committed to create a positive impact for the community at large”, adds Andres. 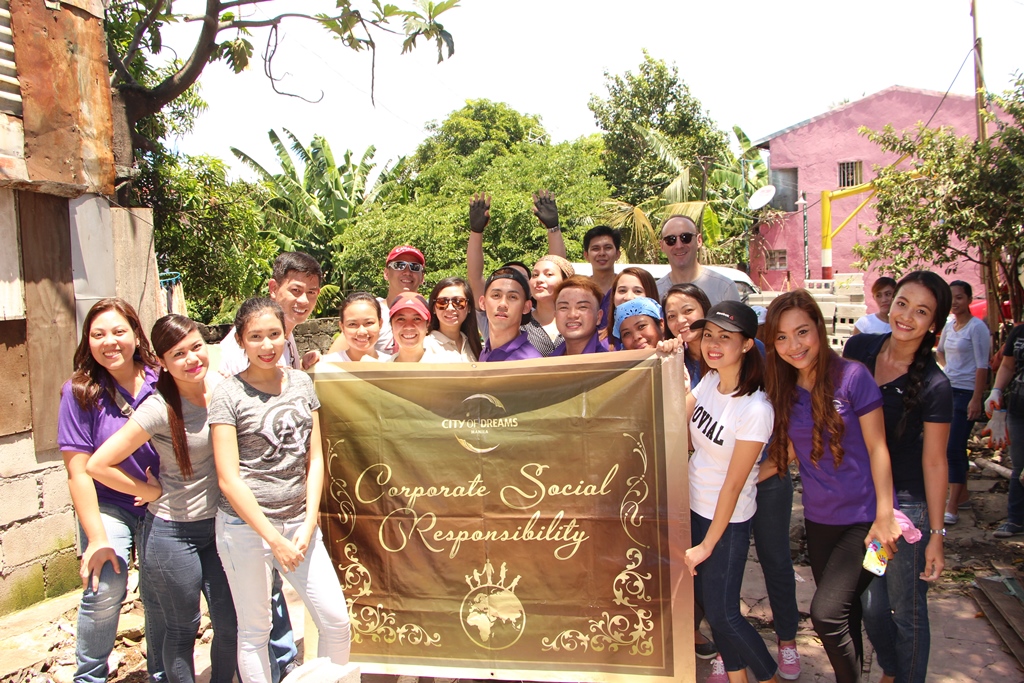 Supporting City of Dreams Manila’s corporate culture and vision towards community service, its employees actively volunteer their time and services in charitable and civic institutions, building homes and rehabilitation for indigent communities, participating in environmental activities such as tree planting and coastal cleanup, Red Cross blood donation drives, and visits to various orphanages, homes for the elderly and nursing homes. .

For its year-round “Spoonful of Dreams”, City of Dreams Manila’s has adopted Parañaque’s Bahay Aruga orphanage as its key CSR beneficiary. Since the resort’s pre-opening, it has been conducting feeding programs, rehabilitating the facilities, and hosting field trips and varied activities that bring joy and learning to the children. Other children institutions supported by City of Dreams’ volunteerism program are My Father’s House in Sucat, Hospicio de San Jose and Virlanie Foundation in Metro Manila. Early this year, the integrated resort hosted cancer-stricken children of Child Haus Manila, in support of the Cabinet Spouses Foundation, and businessman Hans Sy’s and entrepreneur Ricky Reyes’ adopted charity. The children were treated to a day of fun at DreamPlay, the DreamWorks animation-inspired interactive play space.

For “Connecting Dreams”, the employees have also volunteered their time, provided meals and interacted with senior citizens at Anawim Home for the Aged and Graces Home for the Elderly; and persons with disabilities at the Tahanang Walang Hagdanan.

“Building Dreams”, another City of Dreams Manila CSR program, sees volunteers building shelters for impoverished communities. Together with Gawad Kalinga, employees participated in the construction of new houses to improve the living conditions of some 1,000 families presently residing at Gawad Kalinga Mangahan Kawayan in Parañaque. The activity targets to build roughly 600 homes within the next three to five years.

“Growing Dreams” is City of Dreams Manila’s tree-planting activity in cooperation with the Department of Environment and Natural Resources (DENR). Employees donated over 1,600 seedlings for the project, while close to 100 volunteers planted trees in Barangay Perez, Calauan, Laguna.

City of Dreams Manila’s employees actively embrace their role in environmental conservation, participating in the Annual International Coastal Cleanup program. Last year, over 100 volunteers mostly from Security and Table Games departments partnered with about 70 members of the 107th squadron of the Philippine Coast Guard and initiated a coastal cleanup along the Manila Bay area, covering a shore-to-bay distance of roughly 10 meters by a shoreline distance of close to 100 meters. The efforts yielded hundreds of kilos of rubbish which were moved off the water’s edge and later on collected by the local city government.

City of Dreams Manila marks the formal entry of Melco Crown Entertainment into the fast-growing and dynamic tourism industry in the Philippines. The integrated casino resort at Entertainment City, Manila Bay, Manila, officially opened its doors to the public in February 2015 and is operated by Melco Crown Philippines.

The dynamic and innovative resort complex, located on an approximately 6.2-hectare site at the gateway to Entertainment City, includes the ultimate in entertainment, hotel, retail and dining and lifestyle experiences with aggregated gaming space, including VIP and mass-market gaming facilities with up to approximately 264 gaming tables, 1,535 slot machines and 114 electronic table games.

City of Dreams Manila delivers an unparalleled entertainment and hospitality experience to the Philippines and is playing a key role in strengthening the depth and diversity of Manila’s leisure, business and tourism offering, enhancing its growing position as one of Asia’s premier leisure destinations. It has been developed to specifically meet the needs of the large, rapidly growing and increasingly diverse audience of leisure and entertainment seekers both in the Philippines and those visiting Manila from across the Asia region and around the world.