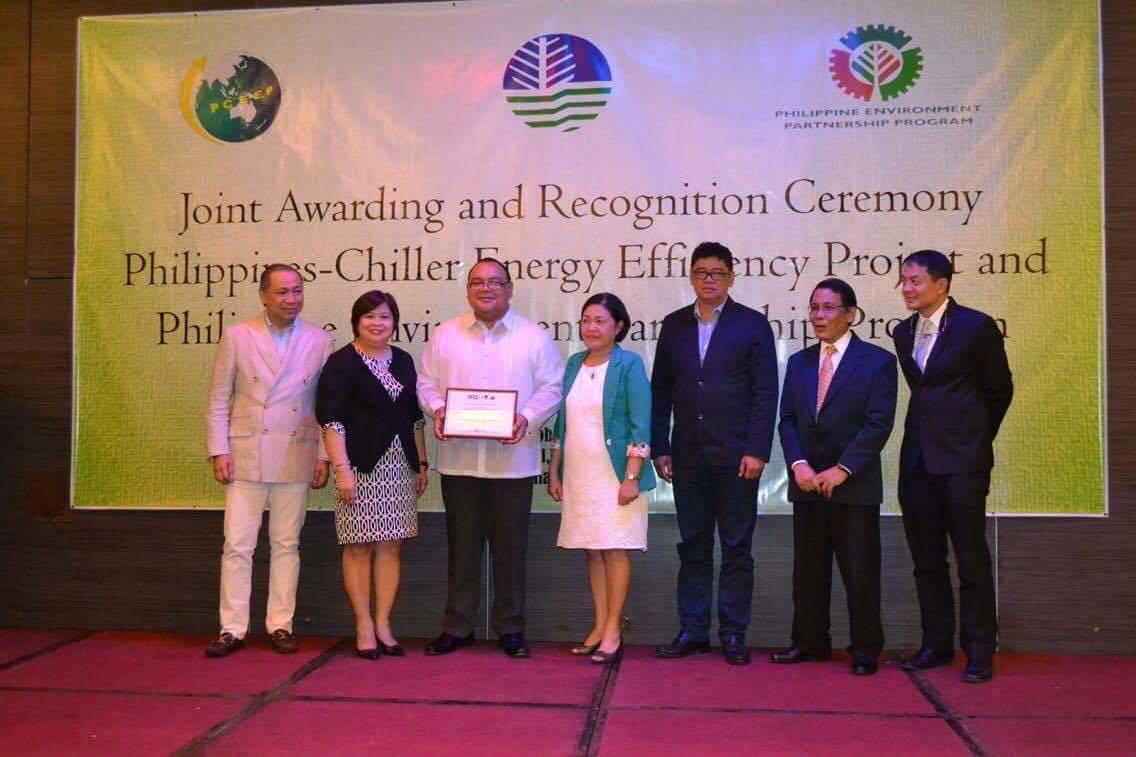 Stellar Equipment & Machinery, Inc. (Stellar), an affiliate of Primer Group of Companies, recently received a Special Citation from the Department of Environment and Natural Resources (DENR) for installing the most number of eco-friendly and energy-efficient chillers under the World Bank-funded Philippine Chiller Energy Efficiency Program (PCEEP).

The award was received by Michael Dauden, Vice President and General Manager of Stellar and Jason Thai, Key Accounts Manager during a ceremony held last October 12, 2016 at Hotel H20 in Manila.

Through the provision of financial and technical assistance, PCEEP intends to expedite the transition from inefficient ozone depleting substances or ODS-based chillers to non-ODS and more energy efficient ones.

“We are extremely proud to have such a significant contribution to this project,” Dauden said, adding that Stellar’s flagship brand, YORK Air Conditioners makes it possible for businesses to leverage on its use modern HVAC technologies that are both efficient and environment-friendly.

Under the PCEEP program, we were able to install around 31 YORK® YK centrifugal chillers using environment-friendly and energy-saving R134A refrigerant.” Dauden added. “About half of the overall number of chillers under the program came from Stellar and with that, we were able to reduce over 21,000 tons of greenhouse gases, equivalent to taking out roughly 70,000 vehicles cars from EDSA for an entire month.”

Dauden said aside from its positive impact on the environment, Stellar was able to save a significant amount in terms of energy savings through its energy-efficient YORK® chillers.

“We were able to save millions for a wide range of customers, from major malls, department stores, large hotels, banks and international schools”.

YORK® model YK centrifugal chillers, manufactured by Johnson Controls, have been engineered for maximum efficiency at both design and off-design conditions. The chillers use the OptiView™ Control Center, which uses microprocessor capabilities to save energy.

Established in 1989, Stellar is the distributor of Johnson Controls building efficiency systems and York air conditioning systems in the Philippines.  A proud affiliate of the Primer Group of Companies, Stellar offers its strong nationwide service and technical support, experienced sales team, contractors, as well as sales employees assigned in various retail stores all over the country.  Stellar continues to expand its retail presence and afters sales services in key cities in Visayas and Mindanao.  Stellar’s firm commitment to attend to customer needs remains at the forefront of the company’s vision.

ABOUT PRIMER GROUP OF COMPANIES

Established in the Philippines in 1985, the Primer Group of Companies is engaged in the retail and distribution of the world’s top and premium consumer brands in outdoor, travel, footwear, fashion, wellness and urban lifestyle. It has also established a solid ground in the industrial products and services landscape, with companies in full-scale printing, air-conditioning and creative graphic design and services.

The company is aggressively expanding to become the leader in the global distribution and innovation of premium goods and services. Its retail authority alone has grown to over 150 premium brands, with over 500 free-standing stores worldwide. Headquartered in Manila, Philippines, the Primer Group employs over 3,000; and has presence in Hong Kong, Indonesia, Japan, Malaysia, Singapore, Taiwan, Thailand, Vietnam, Australia and the United Kingdom.